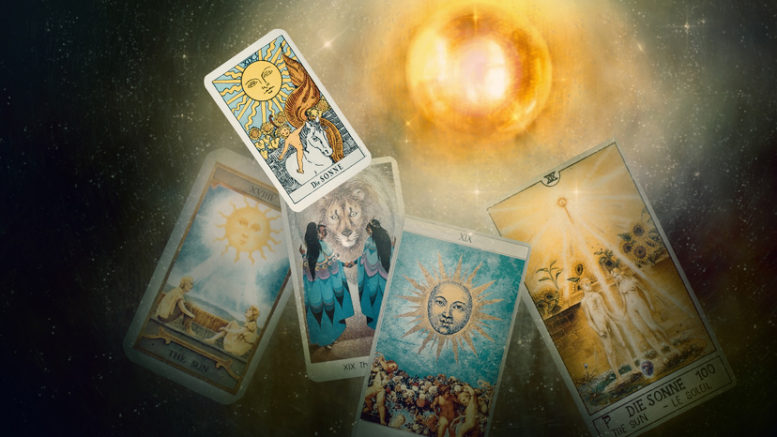 History of the Tarot
There are many stories surrounding the origins of Tarot cards.  Some of the most common but unsubstantiated ones are that they came originally from Egypt, or India or were invented by gypsies.

Current understanding is that the tarot we have today developed from a card game invented in the fifteenth century in Northern Italy. Hand painted decks of cards were created for the nobility to play games similar to bridge.  They are thought to have been based on the ordinary playing cards we have today.

Illustration
The art work on the cards is thought to have resembled the paintings at this time, using the symbolism and culture of Medieval and Renaissance Europe.  Art was used to tell stories, particularly religious ones, and record history in this period because many people could not read the written word.

Origin of the word Tarot
Around 1530 there is evidence of a card deck called ‘Tarocchi’ or ‘Tarocco’ if they were referring to a single deck.  They were separate from the ordinary playing cards used to play  a game called ‘Triumphs’ or ‘Trumps’. The French form of the Italian ‘Tarocco’ is ‘Tarot’.

Divination
Although there is some suggestion in verses describing personality and fate that Tarot cards were used for divination earlier than 1700, the first evidence comes from Bologna, Italy,  in a record of meanings assigned to the cards. From 1790, there is evidence that the pictures were being adapted to suggest esoteric meanings.  We don’t know exactly what the cards looked like or the meanings assigned.

Rider Waite Tarot Deck
There are a number of different Tarot sets available today.  One of the most recognised card decks that is still available today is the set illustrated by Pamela Coleman Smith in 1909.  It is known as the Rider Waite or Raider Waite Colman deck, Rider being the publisher, Waite interpreted the meanings and Colman illustrated the cards.

Arthur Waite
Arthur Edward Waite (1857 – 1942) was a scholar of the Kaballah and is often described as a Mystic. He published a book in 1911 called the Pictorial Key to the Tarot, in which he discusses the history of the Tarot, and sets out a detailed meaning for each of the 78 cards, along with some suggestions of how to lay out the cards to read them.   In 1909, Waite commissioned a London based artist, Pamela Coleman Smith (1878 – 1951), to illustrate the 78 cards, and later to create black and white images to use in his book.

Using the Tarot
If the Tarot is to be used in the way Arthur Waite first intended, the reader would need to learn the meanings he assigned to each of the 78 cards.  The images contain symbolism that was intended to make it easier to remember what each card represented.  However, it is not always obvious to us today how these symbols relate to the meanings ascribed by Waite.  It would take a long time to memorise all the different cards and their meanings.

A simple way of using the Tarot
There is a much easier way to use the cards, for those interested in using them as a guide or focal point for divination. Keeping to the idea that each of the major Arcana cards and the suits have a specific meaning attached to them, they can be reduced down to one basic meaning.  This can be used to create a framework to interpret the symbols in the illustrations.

Each of the suits and the court cards seem to relate to a specific area of life.

Major Arcana
Each of the cards of the major arcana have a title and can be reduced to a basic meaning.

Laying out the cards
When reading the cards, be clear about your question before you lay the cards.  You can choose a simple layout such as past, present and future, or time periods such as one month, six months a year.

The layout provides the structure to read the cards by, the basic meanings indicate which area of life to focus on and the symbols within the images on the cards can be used to fill out the details of the reading.

Be the first to comment on "Tarot History and a simplified way to use Tarot Cards."