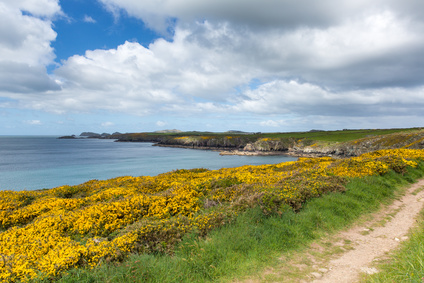 Standing in a field above St Non’s Bay on the outskirts of the city of St Davids are the ruins of St Non’s Chapel and Well where it is said that in 500AD St Non gave birth to St David. Unfortunately very little is known about the site as the ruins are such that architectural details and other age-identifying factors are long gone.

To the best knowledge, the slab that bears a Latin Ring Cross (possibly built into the walls at some point) originates from somewhere around the 7th century. In medieval times, there were many pilgrimage chapels dotted around the area of St Davids, with St Non’s identified as the “Chief and Principle” chapel. During the reformation, the chapel was put out of use and re-appropriated into a dwelling house (which fell into ruins by the 19th century), then in the 16th Century it was used as a Leek garden. In 1950 it was conserved and is now maintained by CADW (Welsh Heritage).

The legend goes that at the moment of St David’s birth, there begun a great thunderstorm and a well sprung up nearby.

The Well is credited with healing powers and is marked by a simple arch and shrine to St Non, whose statue is believed to be the receiver of prayers for children and is adorned with bracelets and necklaces. As it currently stands, the well dates from the 1950’s when it was repaired. Some visitors still follow the traditions of drinking or applying the waters for healing, blessing babies by dousing the waters onto their heads and casting offerings into the well with their wishes.

In such a beautiful area, there is plenty to explore. Click the links below for more information:

With thanks to Sacred Destinations for the information: http://www.sacred-destinations.com/wales/sacred-sites