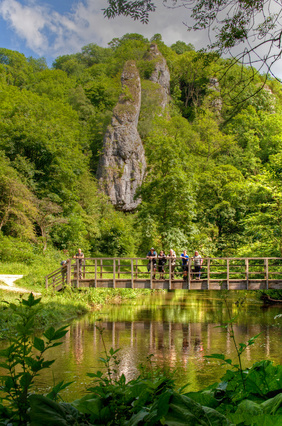 Walking in the limestone Dales of the Peak District England UK

Dovedale is a beautiful valley, village and gorge carved out of Limestone by melting ice in two ice-ages. The limestone that forms the geology of Dovedale is actually the fossilised remains of sea-creatures from around 350 million years ago. It is also home to dry caves called Dove Caves and the spectacular Reynard’s Kitchen Cave, which has provided many of the Bronze-Age artefacts which are on display at the Buxton Museum. Reynard’s Kitchen Cave was the site of an exciting discovery in 2014 of late Iron-Age and Roman coins: some pre-dating the recognised beginning of the Roman Invasion.

Now one of the most visited natural tourism sites in the UK, tourism began in the 18th century and one bridge from the medieval times is still in regular use: Viator’s Bridge.

Much of the area is now under the ownership of the National Trust. There are some truly spectacular Limestone rock formations, including The Lionshead Rock (so named due to it’s likeness of a grand lion’s head) and the fabled Lover’s Leap.

Lover’s Leap is a Limestone promontory, which takes it’s name from a legend: A young woman believed that her lover had been killed in the Napoleonic Wars. Distraught, she threw herself from the top of the rock only to be saved by her skirts becoming entangled in the branches of a tree further down. She was rescued and returned home to the news that her lover was alive and well, and that he would be reunited with her shortly. This legend has been placed at numerous points in time including World War 2, but it is generally told from it’s original timescale of the Napoleonic Wars.

“One of England’s finest Wildlife Sites”

For more information on visiting this beautiful part of the Lake District, visit: