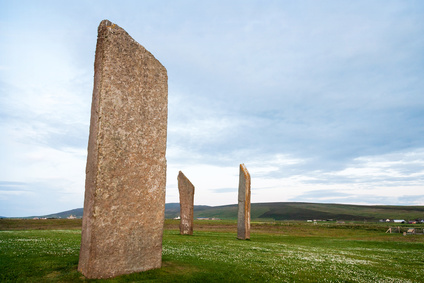 Standing Stones of Stenness, Orkney, Scotland. A neolithic stone circle which is part of The Heart of Neolithic Orkney World Heritage Site.

Five miles northeast of Stromness on the mainland of Orkney, Scotland, stands a Neolithic stone circle. The Stones of Stenness may be the oldest henge site in the British Isles and it is lovingly cared for by Historic Scotland.

Sited on the bank of a stream which connects two lochs, the stones used to be accessible only by a stepping stone causeway, but a bridge has now been installed. There are a number of other Neolithic sites located around the island, suggesting that the island was of great ritualistic importance. Knowing as we do that animals are more spiritually aware, it is fascinating that there are a multitude of accounts from people who have seen sheep and cattle grazing and sleeping inside the stone circle, but not straying far outside of it.

In the 18th century, the site was still associated with traditions and rituals, although by this time they were related to the Norse Gods; one engraving shows the Odin Stone. The Odin Stone was pierced with a circular hole, which couples would hold hands through when newly engaged to be married or become engaged whilst holding hands through the stone. Sadly, in 1814 an ignorant and irate farmer smashed the Odin Stone, destroyed another and toppled a third stone in a fit of rage over ‘being disturbed’ by pilgrims performing rituals at the stones near his land. The outraged locals took matters into their own hands and physically stopped the farmer, before attempting to reconstruct the site. Unfortunately, although they managed to right to toppled stone, there was nothing to be done for the two smashed stones and their reconstruction was deemed largely inaccurate. Today, two main stones remain upright, with some other smaller stones forming what’s left of the circle.

Finally, in December 1999 the site was inscribed as a World Heritage Site, assuring it’s future.

The Orkney Islands are full of fascinating history, for more information visit: