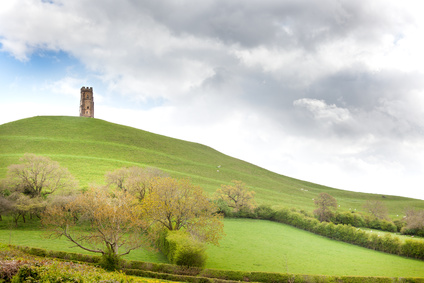 Glastonbury Tor is a hill in Glastonbury, Somerset, which is topped by the Roofless Grade 1 listed building St Michael’s Tower. This tower has been restored and partially rebuilt many times and is all that remains of the Church of St Michael which once stood on the site.

The site is managed by the National Trust and is a conical hill made up off clay and Blue Lias which was formed when the hard peak of Sandstone was left exposed after the erosion of the softer deposits surrounding it. It is also terraced, making it easier to climb to the top of the hill but there is no explanation as to how this may have happened. In recent years a concrete path and steps have been put in place to allow easier access. There is also the Avalon Apple Orchard at the foot of the Tor, which provides apples for the world famous Somerset Ciders.

Many artefacts have been found in the surrounding areas, including items dating from the Iron Age to the Roman Eras. During the Saxon and early medieval periods, there were several constructions on the summit including what is believed to be churches (one made of wood and destroyed by an earthquake in 1275, another of stone called the Church of St Michael of which the tower remains) and a monk’s hermitage. A 10th or 11th century wheel cross has also been recovered from the site.

The Tor forms part of the Arthurian Legends and is mentioned several times in Celtic Mythology. Down in the small town of Glastonbury, many locals and shop keepers will happily tell you of the history, myths and legends that play such a huge part in the daily life of Glastonbury and it’s people.

Many thousands of visitors make the climb to the top of the Tor every year, some on a spiritual pilgrimage, some to absorb yet more history that can be found in Glastonbury and some just to enjoy the incredible views for miles and miles over the Somerset Levels.

An extraordinary place, Glastonbury is a beautiful place of spirituality and peace, and the Tor tops it all.

For more information on visiting the Tor:

For more information on visiting Somerset: