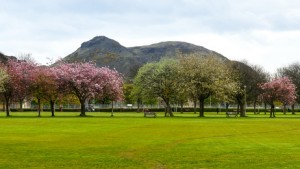 Some believe the name came from the legends of King Arthur, others believe it is a misnomer created over the years and that the original name was Archer’s Seat. Either way there is no denying that if nothing else, this particular hill has an atmosphere that is well worth the hike.

Holyrood Park is a group of hills in Edinburgh, Arthur’s Seat being the main peak. There are many routes of varying difficulty that can be used to reach the peak and thankfully at some point someone had the merciful thought of paving a proper pathway into the easiest route. Arthur’s Seat has its fair share of interesting tales to tell, as you would expect from its location in a city with so much intriguing history. Upon the hill stand the remains of several forts, each a lasting monument to the trials and tribulations of this bustling city. The most bizarre tale, however, is actually unconnected to the fascinating fort remains.

In 1836 a set of 17 miniature coffins were found in one of the caves by a group of young boys who were out hunting rabbits. Inside the tiny coffins were wooden statues, each with painted faces and shoes and with custom made clothes. To this day there is no solid explanation; some believe that they were the objects of spells cast by witches while others believe they may have been carried by sailors to ward off death (to show the reaper that they had already accepted their mortality and carried around miniature versions of their own corpses as proof). A more specific theory, however, is that they relate to the 17 victims of the serial-killer-duo Burke and Hare. The Coffins and their contents are now on display at The National Museum of Scotland.

On a less gruesome and creepy note, the peak also has a significance to the Church of Jesus Christ of the Latter Day Saints, as in 1840 the nation of Scotland was dedicated for its “work in the preaching of the gospel” here and in 1850 the apostle Orson Pratt climbed the peak to pray for more converts.

Aside from the history and legends that are attached to Arthur’s Seat, however, the view across the city is stunning and the calm atmosphere is worth the hike to get there.

For more information on Arthur’s Seat and the busy city of Edinburgh, explore the following link: