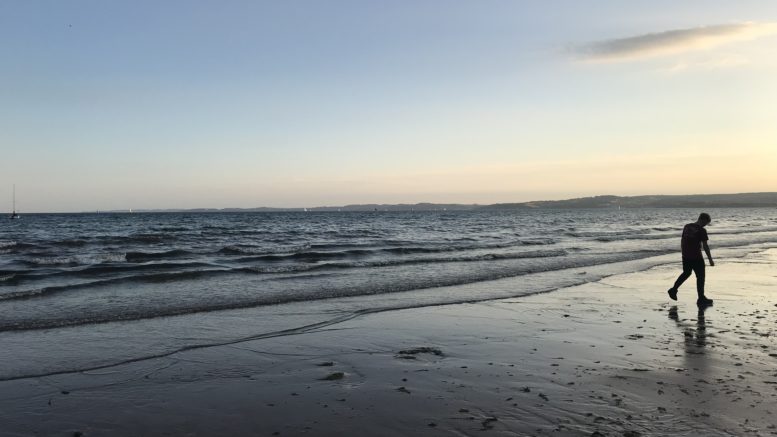 Devon on the South coast of Britain attracts millions of visitors each year who enjoy it’s seaside resorts and rich history from fossils to forts.

With so much activity taking place throughout the ages, some might feel the energy in Devon carries the scars.

Many people will visit the coast while they are in Devon, and it’s hard not to be in awe of the Sea’s might power, and the Rock’s stedfast resilience, as they clash at the coast.

For as rock and sand is carried away by the sea from one place, it is redeposited in another, reminding us of the true conservation of all things in the universe.  Matter and Energy being the same, never destroyed but changed from one form to another.

In the same way the energy of Love can never be destroyed, but only moves and changes between forms, healing the scars where it is needed and creating new landscapes on the Spirit plane.

Devon, Dorset and Cornwall all sit in an area rich with archeological interest.  The Jurassic Coast where fossils and bones are regularly discovered, and as is human nature, we try to understand what has gone before us in order to understand what is to come.

We wonder what these beasts looked like, what landscape they looked out upon and what this Earth plane has learnt from so many years of change.

The coast line has many different rock formations, created over thousands of years, and in Exmouth museums show fossils and discoveries.

Often we learn the most from our own mistakes, and human history has certainly shown us the consequences of brutality, war and conflict.  Some may wonder if we’ll ever learn, some may feel that we are, slowly.

The City of Exeter has many reminders of the painful lessons that need to be learnt.  A fortified Roman settlement marked by the City wall, a key City in the English Civil War and much later, heavily damaged in World War 2.

Thankfully we can enjoy everything Devon has to offer in peace, absorbing the complex energies built layer by layer over time and meditating to the rolling sounds of the sea, and the breeze, and the wildlife which has seen so many things.

Be the first to comment on "Spiritual Devon Coastline"