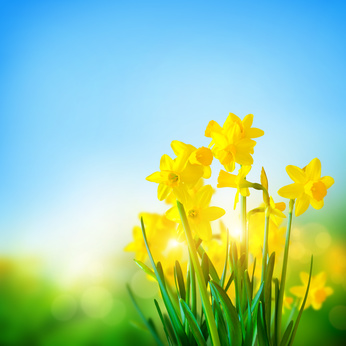 The name Easter comes from the Anglo Saxon Name for April, the month that Easter traditionally falls within, which is Eostre Monath.  The meaning of that is “The month of openings” which of course relates to the season of Spring.

Spring is the time when those things planted in the earth (trees, bushes, flowers, vegetables etc.) begin to grow, and the world seems to regain its colour.  So this time of year has become associated with new beginnings, not only for the things living in the earth, but also the animals that hibernate through the winter are waking up, the birds and many other animals are producing their babies, and people generally start to feel better, more positive, after the winter.  This may be something to do with the return of sunnier days, and the sun’s beneficial effects on our health and feelings of wellbeing.

We are now at a point in the year when we can think about our own lives in terms of the new beginnings we wish to have.  If the energise of nature are supporting new growth, then surely this is as good a time as any for us to be thinking about the ways in which we wish to shed our old, out dated habits, ways and beliefs.  It’s a good time to let go of past hurts, failures and disappointments.   It can be a good time to think about ourselves and what we want from life, and to plan the next step in our personal development.

What do you want for Easter?