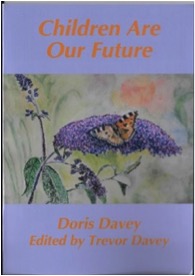 ‘When Trevor was nearly four, Uncle Reg and I took him, together with a little crowd from Hounslow Lyceum (Spiritualist Sunday School), to the Engineering and Marine Exhibition at Olympia (event halls located in Kensington, West London) there were many things to interest the boys and girls, working models, parts of engines and places where they could climb little flights of steps to see how things worked. But what appealed to Trevor most were the telephone booths just behind the Refreshment Bar.

Uncle Reg always delights in giving the children what they want, so when Trevor said he wanted to telephone someone, I took him to one booth and Uncle went at the other and he rang us up.

I expect you all remember talking on the telephone for the first time – most of you I expect were held up to say “Hello Daddy” but when young Trevor spoke it was to start a one-sided conversation, so far as we could hear, with “Memel” a little spirit child who had attached herself to him, and with whom he was quite used to playing. He would tell us she wore red shoes.

So on this occasion, Trevor used the telephone as a medium to talk to the Spirit World, which was rather strange really, as usually it’s the Medium who is used as a kind of telephone to talk to those who have passed on.

(This event happened nearly 70 years ago and yes I do remember Spirit coming close till I was probably seven or so when it stopped and took nearly 50 years before to ability to communicate with Spirit re-established itself. However, it is not uncommon for young children to have their Spirit Companions, and if the family understands it is a wonderful experience).’

– Extract taken from the book ‘Children Are Our Future’