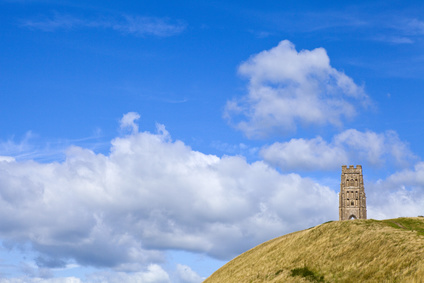 My partner and I recently returned from a holiday in Somerset, where we hired a cottage in beautiful Glastonbury. The myths and legends of Camelot, King Arthur and Spiritualism were some of our main reasons for wanting to explore the legendary area known by many names: Isle of Avalon, the Mendips, Avon. I wasn’t sure how my partner would find this holiday, as the area is generally rather spiritual and he is rather factual, scientific and “clear cut”. However, I was delightfully surprised by his fascinated reactions to some of the places we visited.

Our first mission was to climb the Tor, a stunning hill topped by the remains of Grade 1 listed building St Michael’s Tower. Besides the stunning view, the wonderful sound of silence is unlike anything we have experienced before. Despite the tiny vehicles that can be seen motoring along the road at the foot of the hill, and the groups of tourists wandering and photo taking, it’s a peaceful place to take a break; a gentle silence as opposed to a blank one. We easily spent an hour or more just taking in the peaceful atmosphere and amazing view across the Mendips.

Another place of great interest to those of Spiritual faith, is the Chalice Well and Gardens. The natural spring Well is believed to have been in use for 2000 years, and it’s red colour is said to come from the cup of Christ’s blood, placed at the Well by Joseph of Arimathea. Many pilgrims visit the Well to meditate, drink and bathe in it’s healing waters. Having found a secluded seat (hidden inside a canopy of climbing vines) I took the chance to unwind while my partner studied the rituals of the pilgrims and assessed the scientific notions of the flow of the spring, including trying to figure out how the flow of water has never stopped. When underground pipes have frozen solid cutting off the domestic watersupply and when drought has left rivers completely dried out the spring has never faltered. A fantastic metaphor for a Soul, I can’t help but think.

Finally, the City of Bath with it’s natural spring spa and rich history. Named for the Roman baths built on the River Avon around 60 AD, it is believed that the therapeutic hot springs have existed for much, much longer and have been attracting pilgrims for thousands of years. It’s not hard to see why this city is such an attraction for Spiritual people: despite the throng of tourists it has a relaxing yet energising atmosphere. The Grade 1 and 2 Listed buildings practically breathe the energy of the millions of souls that have touched them, and the seemingly endless open spaces and quiet nooks and crannies are the perfect way to unwind and recharge in the presence of ancient nature.

Anyone looking for a break from the rat-race and somewhere to feed your soul, I would happily recommend you head for the Mendips.