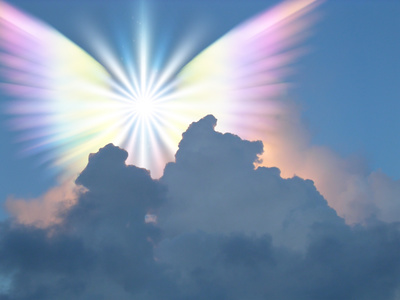 Recently I found myself in a situation that made me think about the way we connect with those that are not of a physical manifestation. Regardless of our beliefs, we can surely all admit to being guilty of referring to, blaming, or calling upon a higher being in times of stress, need or joy. For some it’s a word in their vocabulary, for others an outlet of frustration, and for many it is an open admission that there must be higher powers at work.

I personally call upon those who have passed on before me whenever I feel I need their assistance. My partner, however, surprised me with his view on things.

Recently my partner was told he was going to be made redundant due to spending cuts at his place of employment. There followed a week of stress in which no new jobs were found, we realised the Christmas countdown had begun, and that he had bills to pay that relied on his being employed and on a certain wage or above. Thankfully, we both have a close family network who would no doubt do everything they could to help us, and as we don’t live together, it is only himself he has to worry about supporting. Regardless, every time we thought about it, my stress levels went through the roof and he got depressed. I consistently had conversations with my friends and relatives in the spirit world, requesting some assistance as we were doing everything we could think of and nothing was coming his way.

Then one day, he got a call. A company had realised they were 6 employees short and that their situation was dire. Whoever they interviewed would have to be prepared to start immediately. With only one week left at his current job, my partner leapt at the chance.

“You’ll be fine. You have everything they need, you have a great track record and references, everyone takes an immediate liking to you…. and I’ve had my helpers-from-above on it for days.”

“I understand that, but it doesn’t mean it’s in the bag. I wish I could just have some real reassurance, some definite indication.”

“Have you spoken to your Nan recently? Ask her for some help.” (I should explain, we used to visit his Nan’s grave regularly so he could focus and “have a chat” with her. One day, he decided the grave was too morbid and he’d rather just find his own space and time to communicate with her.)

“…No. She shouldn’t have to be spending her time worrying about me and my mundane problems. She’s supposed to be spending her afterlife relaxing. She spent her life down here looking after all of us, and she’s probably got a bunch more of us up there to spend time with.”

“She’d want to help you out. You’re still her grandson. And she’s got some awesome resources up there that I’m sure she’d love to show off.”

And there he uncomfortably and abruptly changed the topic to something about spiders and how strong their webs are.

I thought that would be the end of it. Once his mind is made up, there’s no changing it. However two days later, we were discussing the vast amount of vivid dreams we’ve been having recently (I rather enjoyed my time as a bouncy-castle tester on Monday night), when he said:

“Nan was in my dream Sunday night. She just dropped in to say hello, I guess.”

And that was that. As it turns out, he did the interview and didn’t like what he saw. Less than a week later got offered a much better job for a different company, somewhere that he hadn’t even thought to look. He starts there next week.

Funny how things happen, isn’t it?